All children, except one, grow up. They soon know that they will grow up. Wendy knew this, too. One day when she was two years old she was playing in a garden, and she plucked a flower and ran with it to her mother. Mrs. Darling cried, “Oh, why can’t you remain like this forever!” But Wendy knew that she must grow up.

There were three children in the family: Wendy, John, and Michael. The Darlings were poor, and the nurse for the children was a dog, called Nana. She was an excellent nurse. Of course her kennel was in the nursery. The nursery was wide and airy, with a large window, and a bright fire with a high fire-guard round it, and a big clock, and nursery-rhyme pictures over the walls. There never was a happier family[2 - There never was a happier family – Не было семьи счастливей] until the coming of Peter Pan.

Mrs. Darling first heard of Peter when she was putting her children to bed. She knew of no Peter[3 - she knew of no Peter – она не знала никакого Питера], and yet he was here and there in John and Michael and Wendy’s minds. Children often talked about the island of Neverland[4 - island of Neverland – остров Небывалый] and Peter Pan who lived there.

“Oh no, he isn’t grown up,” Wendy assured her confidently, “and he is just my size.” She meant that he was her size in both mind and body; she didn’t know how she knew, she just knew it.

Mrs. Darling consulted Mr. Darling, but he just smiled. “It is some nonsense,” he said.

On the night on which our story begins, Nana was dozing peacefully by the fireside, with her head between her paws. All the children were in bed.

Nana got up, and stretched herself, and carefully switched on the electric light. She managed to do that[6 - She managed to do that – Ей удавалось это делать] with her mouth. Then she turned the bed-clothes neatly down and hung the little pyjamas over the fire-guard. She then trotted up to the bathroom and turned on the water.

Nana was an excellent nurse!

Mrs. Darling was sewing by the fireplace. It was something for Michael’s birthday. The fire was warm, her head nodded.

While she slept she had a dream. She dreamt that the Neverland had come too near and that a strange boy came from it.

While Mrs. Darling was dreaming, she heard a wee noise outside the window, as a tiny figure, no bigger than a little boy, tried the window-latch. The window of the nursery blew open, and the boy dropped on the floor. He was accompanied by a strange light. She opened her eyes, and saw the boy, and she knew at once that he was Peter Pan. He was a lovely boy, clad in skeleton leaves[7 - clad in skeleton leaves – одетый в высохшие листья]. When he saw she was a grown-up, he gnashed his white teeth at her.

Mrs. Darling screamed, and, as if[8 - as if – как будто] in answer to a bell, the door opened, and Nana entered. She growled and sprang at the boy, who leapt through the window. Again Mrs. Darling screamed, and she ran down into the street to look for his little body, but it was not there; and she looked up, and in the black night she could see a shooting star[9 - shooting star – падающая звезда].

She returned to the nursery, and found Nana with something in her mouth. It was the boy’s shadow. As he leapt at the window Nana closed it quickly, too late to catch him, but his shadow had no time to get out. 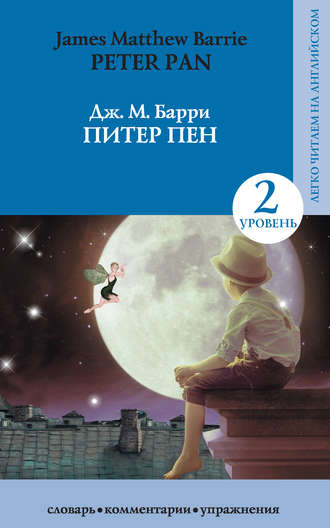